Hello from NeuroMaker! We’ve been working hard creating new experiences and technology to enrich your experience! To do that, we’ve been using our brains quite a bit. Since we spend a lot of our time teaching others how to better interact with their brain, we think it’s a great time to unpack some of its secrets. So sit back, relax and follow along with three of our favorite facts about the brain. Enjoy!

The Brain is Composed of Tons and Tons of Cells

The brain is arguably one of if not the most complicated system in the universe. An adult brain weighs about 3 pounds and is constructed of a neural network composed of about 100 billion neurons out of 100 trillions of total brain cells. At any moment in time, these neurons transmit electrical signals between each other in areas called synapses. Each neuron alone can host hundreds to thousands of these synapses that “talk” to each other through electro-chemical signals. Current estimates list somewhere around 0.15 quadrillion synapses within the human brain. For context, one quadrillion is one million billion.

Your Brain is an Incredibly Power-Efficient Computer

If you were able to take a piece of brain tissue about the size of a grain of sand, that small piece alone would have nearly 100,000 neurons and about 1 billion synapses. All of these “grains of sand” put together inside of your head create an incredible electrical symphony that keeps us alive, influences our emotions, controls all movement and allows you to read, understand, remember and contextualize the information you are reading right now. Despite the sheer brilliance of this incredible electrical harmony, all of this neural electrical activity and processing power runs at approximately 20 watts, which is approximately the power of a dimly lit light bulb. For comparison, a high level gaming computer running a complex video game will run anywhere between 150 to 500 watts, just to run a video game. Although the brain is computing much, much more information, the computer we connect to a NeuroMaker BCI system is going to need more power to decode just a small piece of brain information than the brain creating those signals itself. Talk about efficiency!

The Voltage Strength Between Brain Cells is More Powerful than Lightning

As we discuss billions of these different neurons firing electrochemical signals all day long it may seem like there is a buzzing lightning storm in your scalp. However, we just learned that all of this electrical activity combined is only producing enough electrical power to dimly light up a light bulb. So wait… is the brain a miracle of powerful electrical signals ready to zap small bursts of energy or is it just a dim light bulb?

From the absolute point of view, the signals the NeuroMaker BCI sensor detects are very small. We are going to be competing against other electrical signals close to your head that will be stronger at the scalp than what our brain puts out. After all, if you touch your scalp with your finger you won’t get electrocuted by your brain! It might seem like then, that the electricity inside of the brain really isn’t much to brag about.

Think about this like standing near a firehouse which is squirting out a stream of water at really high pressure. In this case the pressure of the water is similar to the voltage of an electric signal. If we stand very far away from the hose, even if the pressure is very high, there might only be a slight mist of water that actually hits our face. This is like a weak electrostatic field. However if we walk up to the front of the hose so we can touch it with our hands, boy that water pressure is going to be very painful! This is a strong electrostatic field. It’s all about comparing strength to distance.

Let’s apply this concept to neurons. Each small electrical burst from a neuron is about 70 millivolts. This is a little less than 1/20 of the voltage you would find in a 1.5 volt battery that is probably inside one of your television remote controls. However, the distance between the two points measured is approximately 5 nanometers. 5 nanometers is almost one million times thinner than a typical credit card. Although the voltage is small, the distance is unfathomably microscopic meaning the electrostatic field in this area is massive.

In fact, if we divide the 70 millivolts in this field by the 5 nanometers it travels, we end up with a measurement of 14 million volts per meter. Putting this in perspective, lightning in the sky is produced between the clouds and the earth when its electrostatic field reaches approximately 3 million volts per meter. This means that each time one of our neurons fire, its electrostatic field is over four times what is needed to create lightning! While viewing these signals from a human scale will be challenging, these signals from a microscopic level are unfathomably large. If the brain could somehow be expanded to the size of a skyscraper, we would indeed be viewing a massive lightning storm. 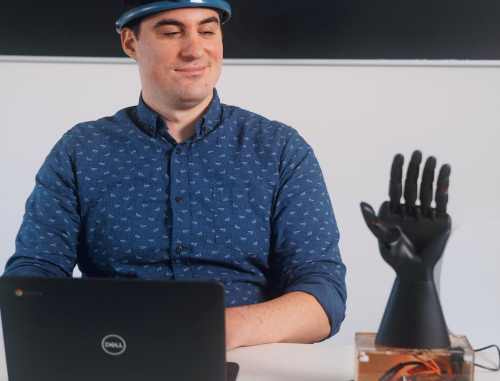 What We’ve Been Up To